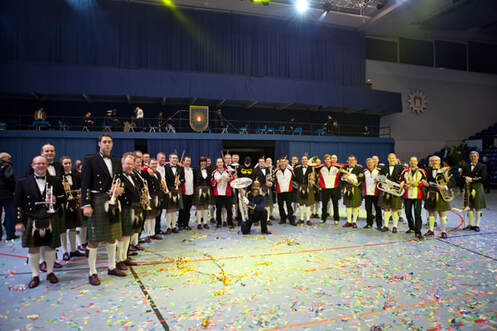 Wales' leading touring brass ensemble, Symphonic Brass Wales has been providing top quality brass performances across Wales & beyond for over a decade

SBW have appeared in concert alongside West End musical theatre star Peter Karrie, in the Imperial Ice Stars production of Cinderella On Ice, performing live at the Royal Albert Hall, London; and performed together with the 1000 male voice WRU male choir, and on numerous other occasions, at the Principality Stadium, Cardiff

Recent corporate engagements include those at and for Arthur Llewellyn Jenkins, Insole Court Manor, Llandaff; and numerous weddings, ceremonies & private functions. Alongside all of this Symphonic Brass Wales also performs regularly for charity, performing annually in aid of both the Royal British Legion and Ty Cymorth children's hospice

SBW remains committed to providing performances of the highest quality at home and abroad, and will continue their role as musical ambassadors for Wales, Welsh music and the medium of brass

For further information or to discuss SBW performing at your event, contact us here