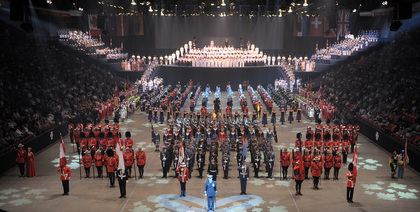 Symphonic Brass Wales musicians are invited to perform in the fanfare team of the 2012 Royal Nova Scotia International Tattoo.

The Tattoo is the world's largest annual indoor show. Featuring a cast of over 2000 performers, and playing to an incredibly appreciative live audience in excess of 60000 people per annum, the show is held each year during the first week of July at the Metro Centre, Halifax, Nova Scotia, Canada, with rehearsals taking place during the last week of July.

The 2012 show will feature a host of the finest international performers from Canada, Estonia, France, Germany, Switzerland, the United Kingdom, and the United States of America. The main themes for the 2012 show will be the bicentennial of the war of 1812, commemoration of the 100th anniversary of the Titanic tragedy, and the Diamond Jubilee of Her Majesty Queen Elizabeth II