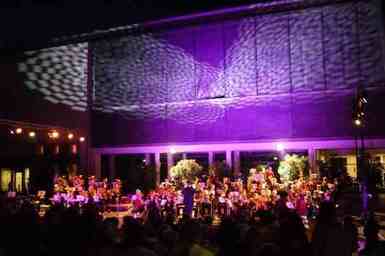 The 17th Nurtingen Tattoo took the form of a large scale outdoor concert, taking place in the centre of Nurtingen at 20:30 on Saturday 20 July. The performance featured three ensembles performing both individually and combined, and culminated in a spectacular performance of the Grand March from Verdi's epic opera Aida, together with the ever-popular Highland Cathedral.

SBW travelled to Nurtingen on Friday July 19 and remained in the city until Sunday July 21. The musicians in the ensemble were drawn from members of Rhondda Cynon Taf's Treherbert & District Band and Monmouthshire;s Abergavenny Borough Band.